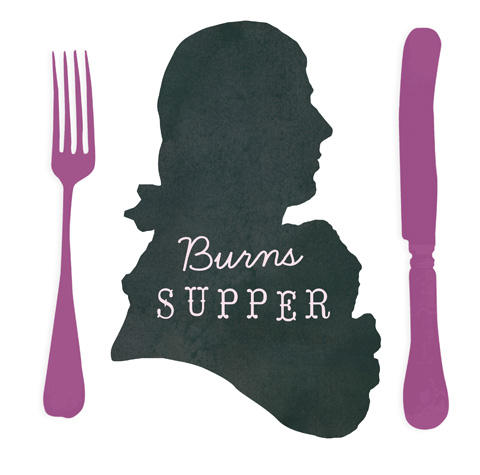 Burns night is an important night for most Scots living around the world and in their native homeland. Burns night is a celebration of famous poet Robert Burns and Scottish culture. However don’t get it confused with Scotland’s own patriots day which is St Andrews day, 30th of November. As recently as 2006,  the Scottish parliament declared this day as an official bank holiday.

One of the real reasons to celebrate on the 25th of January, first and foremost is to raise ‘a dram’ to the life and continuing legacy of one of the world most famous poets, prolific composers and romantics.

The creator of the ‘Auld Lang Syne’ song which ranks as one of the top 3 most popular songs of all time written in the English language. Even after more than 200 years after his death Robert Burns still influences modern artists such as Bob Dylan and including Michael Jackson was reputed to have wanted to release a work of Burns poems set to music.

Throw a Burns Night celebration at home or as a special event!

So remember the bard of Scotland as he would have wanted it. Haggis, whisky, poems & songs with a celebration of all things good and positive about Scottish culture and life in general.

How did Burns night start?

Five years after the death of the poet, a group of his friends gathered together to remember Burns and his poetry. The event soon became an established tradition, and now, every year on his birthday, 25th January, Scots all round the world celebrate Robert Burns with a Burns Supper, following a format similar to the original dinner.

About the man himself. Robert Burns is Scotland’s best loved bard, and considered one of the most famous characters of Scotland’s Cultural history. He is best known as a pioneer of the Romantic movement and his lyrical poetry and songs are loved the world over.

Burns was born on January 25th, 1759 at Alloway, near Ayr, in the southwest of Scotland. His father was a struggling farmer, and Burns had only a few years of formal education before family financial worries forced him to work as a farm labourer.

It was doing so that he met his first love, Nelly Kirkpatrick. She inspired him to try his hand at poetry, a song entitled ‘O, once I lov’d a bonnie lass’, set to the tune of a traditional reel.

When his father died in 1784, he and his brother Gilbert rented a farm near Mauchline. The farmer’s hard way of life taught Burns to take joy in fleeting pleasure and to be sceptical of the moral codes of the well-to-do. These attitudes, along with his capacity for love, friendship and hearty fellowship, provided the chief themes of his poetry.

Burns clearly had a way with the ladies, and in his short life fathered eight illegitimate children, born to five different women. One of these, Jean Armour, bore him twins and became his wife in 1788.

The poet s first published work was ‘Poems, Chiefly in the Scottish Dialect’. This collection of verse contained many of Burn’s best works, including ‘To a Mouse’, and ‘The Holy Fair’ and was released to much critical acclaim.

In the last years of his life, Burns penned many of his great poetic masterpieces such as The Lea Rig, Tam O’Shanter and A Red, Red Rose. In 1795, he was inspired by the events of the French Revolution to write  For a’ that and a’ that , his cry for human equality.

One year later, on July 21, 1796, aged 37, Burns died from rheumatic heart disease, from which he had suffered since he was a child. He was buried in the churchyard of St. Michael’s in Dumfries, as his wife Jean was in childbirth with their ninth child.

Try these other Scottish these printables

We hope you enjoyed our Burns Night Supper ideas, printables and advice! If so, please give us a little love; by liking us on facebook, pinning us on pinterest or following us on twitter. Thank you!